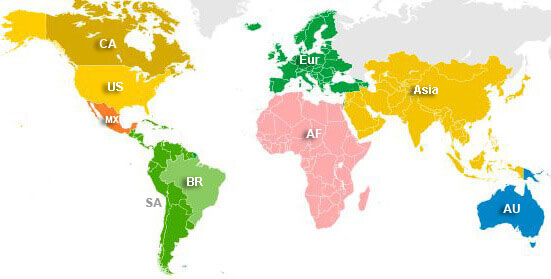 Capital of the country
- More locations and time changes in daylight saving calendar.

In order to regulate the schedules of the different land points, it was decided to divide the 360º terrestrial sphere between 24 time zones of 15º equivalent to 1 hour.

Actually there are 3 more time zones* that take place on the international date line which coincides with the 180º meridian that marks the change of day date.

There are also countries or localities whose geographical location and/or for convenience, use different intermediate times* bands to the exact meridians 15º as they are: Iran - St. John's - Afghanistan - India (Sri Lanka) - Nepal - Myanmar - Eucla - Northern Territory of Australia - South Australia - Lord Howe Island (in winter) - Chatham Islands. These countries use time slots of 30 or 45 minutes. Most of these time zones are between Asia and Oceania

4 colors to differentiate the time zones

that conform to the time bands of 1 hour = meridians of 15º.

In turn, these colors can be practical to visualize the time difference between countries with the same color, since they are multiples of 4 hours. (4 colors).

More eg: between New York and Saudi Arabia, both countries in yellow, (except during New York's summer time), the difference between those countries will be 8 hours, or if it were in green, Colorado and France, all them (multiples of 4 h). In the same way it would be with the rest of countries and colors.

Some countries do not adjust like most, to the exact hour of 60 minutes (1 hour), corresponding to the multiples of meridian of 15º.

To differentiate those countries from the rest, these intermediate time slots have been associated with 5 additional colors.
In this way, it can be easier to distinguish them from most countries that adhere to the 1-hour time slot.

Sorted by time slots from lowest to highest

All the countries that make the time change, advance the clock forward 1 hour during the summer period, and after a few months they go back that hour, with some exceptions, such as for example.

Lord Howe Island UTC +10:30 belonging to Australia, which is only 30' ahead and behind. With this, during the summer period, it equates the same time zone to UTC +11h. with the Australian Territories: New South Wales, Victoria and Tasmania using UTC +10h. in winter. Australia Map.

No Daylight Saving Time throughout the year. 24 hour clock format

This map has tried to keep the four basic colors used from the first wikipedia time zone map, except for the pistachio green color, which to differentiate it more from the rest, it has been decided to replace it with a pink color, (yellow - [orange- brown] - green - pink). See world map

Time zones of continents and countries